When you think about what makes something perfect for carrying with you all the time, there are a couple of factors to consider. First and foremost is the function: Is what you are planning to carry in your pocket or bag something that can and would be used regularly?

Second: What are the size and relative portability of the item or tool you are planning to carry in your EDC gear?  If it is too large or too heavy, it is not likely something you will want to grab and carry with you all the time.  When it comes to flashlights, Olight’s i5t EOS and i5R EOS are pretty much perfect EDC flashlight that meet both form and function requirements. They are small, disappearing into a pocket with ease, as well as bright enough for most general tasks.

The i5t EOS was released by Olight a couple of years ago and it has been a very successful offering for EDC use. It is a small light that is ideal for carrying in a pocket or small bag. The overall length comes in at just under 3.75 inches, and it has a diameter of 0.7 inches. With a AA battery installed, it weighs just 2.12 ounces. While not quite as small as the i3t, the i5t is still an impressively small light. With the modest increase in size over the i3t, you will get an impressive 300 lumens of light on high versus the i3t’s 180 lumens. The light is rated for 3 minutes of continuous use on high before stepping down to 150 lumens for an additional 25 minutes, and then stepping down one final time to 30 lumens for an additional 122 minutes. The i5t includes three modes: high, low, and momentary. It is advertised as “Simple but special” on the Olightstore website, and this is true since there are no other modes or functions and all modes are accessed by the use of the single tail switch. The i5t utilizes a standard 1.5-volt AA battery, and you can easily use a rechargeable NiMH battery in it as well.  However, please note that the i5t is not designed or rated for 14500 lithium-ion batteries.

The i5R EOS was released as an upgrade to the i5t by Olight last year.  The overall size and weight of the i5R are almost identical to the i5t, with the only difference being a 0.02” increase in the overall length, but this is hardly noticeable at all.  Amazingly, the weight remains the same at 2.12 ounces despite now utilizing a customized rechargeable 14500 battery.  In fact, the only way to tell the two apart visually is by looking at the tail caps.  The i5R includes a decorative swirl around the tail cap and the i5t does not. In the Christmas sale 2022, Olight released the I5R limited edition, Dragon and Phoenix Purple, which is only 5,000 PCS.  The dragon and phoenix pattern as I5R's body design makes it really cool. 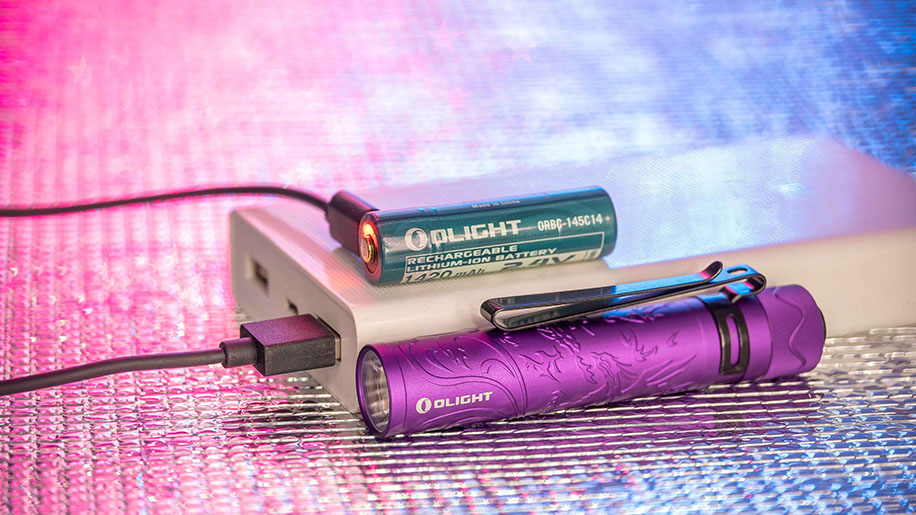 Operating the i5t is actually simple and fairly intuitive, especially since there are only 3 basic modes of operation.  Pressing the tail switch in halfway will turn the light on to the low mode, which is the default mode.  Fully depressing the tail switch following the half-press will only illuminate the light momentarily.  Releasing the tail switch will turn off the light.  By fully pressing the tail switch once, you will activate the constant on the mode in the low setting.  In order to activate the high mode and access the full 300 lumens of output, you will need to initially half-press the tail switch and then slightly release the pressure on the tail switch followed by another half-press.  At this point, you should see the light intensity increase, and once you fully depress the button, it should remain on in the high mode option.  It might take a few tries to get the sequence down, but once you do it is fairly easy and repeatable.  That is it, there are no other modes available like turbo or moonlight.  The simplicity of the operation is nice and makes this a great light to have with you for a variety of uses.

Of course, it is not a tactical light that could blind a would-be attacker or critter.  Nor will you be striking anyone or anything with it. However, for a walk around the yard at night or a hike on the trail at dusk, this provides the perfect amount of light without taking up much space or adding any additional appreciable weight to your EDC gear.

Whether you are #OteamPurple, #OteamOrange, #OteamBlue, or whatever color or metal you prefer, chances are there’s an i5t or i5R that will match your specific needs and style preferences.  Olight has released a number of different limited-edition colors and metals in both.  The i5t has previously been released in copper, titanium, and brass in addition to several standard colors in aluminum alloy. There was even a titanium Damascus i5t released last year that was simply gorgeous. The i5R has been released in both copper and titanium premium metals as well as multiple color options that included several unique color gradient options. Both the i5t and I5R have an ergonomic design that incorporates a double helix as the body knurling. 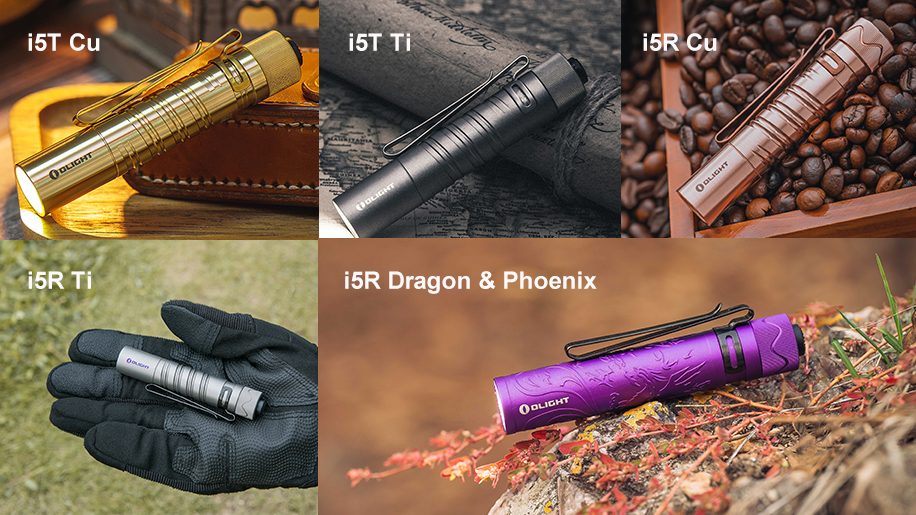 Both the i5t EOS and the i5R EOS are ideal EDC flashlights.  They are lightweight and provide plenty of light and runtimes for a variety of uses and situations although they are small flashlights.  Deciding on one over the other really comes down to personal preference and your typical use scenarios.  The benefit to the i5t is that it uses a common AA battery that can be found just about anywhere.  You should never be without power providing you carry an extra battery or have access to a store nearby.  The i5R, however, uses an Olight customized li-ion battery that isn’t readily available but is rechargeable.  The i5R is compatible with standard AA batteries, however, you will see a performance drop when using them over the 14500 battery.  Those performance gains might not seem impressive at first glance, but considering the size and weight remain the same, the i5R improved upon the i5t by as much as 16% in max lumens and 87% longer total run times, it is definitely remarkable.  Even if you already own an i5t (or several) it is absolutely worth it to upgrade to the i5R. Importantly, don't miss the I5R limited edition on Olight Christmas Sale, you can buy a bundle enjoying up to 40% OFF!