When it comes to Olight tactical lights, which one do you prefer? Some may say Warrior Mini 2 because it's a powerful, EDC tactical light. Others may prefer the Odin series since they're easily mounted on long setups. For this year's O-Fan Day, we put dozens of tactical lights at large discounts on the shelves, and we will introduce three of them to you (Two are new arrivals; one is an existing product.) in this article. Now, let's learn more about these three great tactical lights!

The Olight Sigurd is an innovative angled foregrip light with a Picatinny rail mount. What makes it stand out from other WMLs is its angled grip, which combines the ergonomic advantages of an angled foregrip with a high output tactical light in one sleek package. It has two brightness settings, with a 1450-lumen max output on high and a max beam distance of 240 meters. Additionally, it has a max runtime of up to 4 hours, so you'll never need to worry about running out of power at a critical moment. Whether for home defense or law enforcement, Sigurd is an outstanding choice. 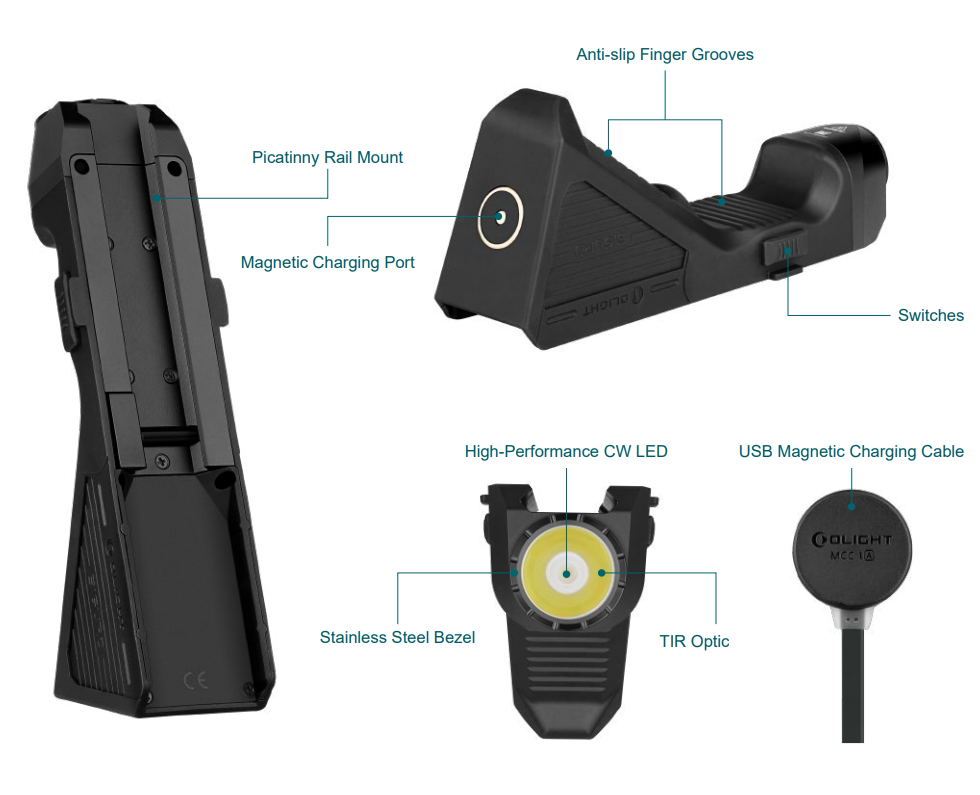 It is worth noting that the ergonomically angled grip features anti-slip grooves and a finger stop, providing you with increased precision, faster transitions, and enhanced recoil control. It also helps to insulate your hand from the heat generated during extended shooting sessions. The switches on either side enable the truly ambidextrous operation and allow you to always maintain a secure grip on the handguard. 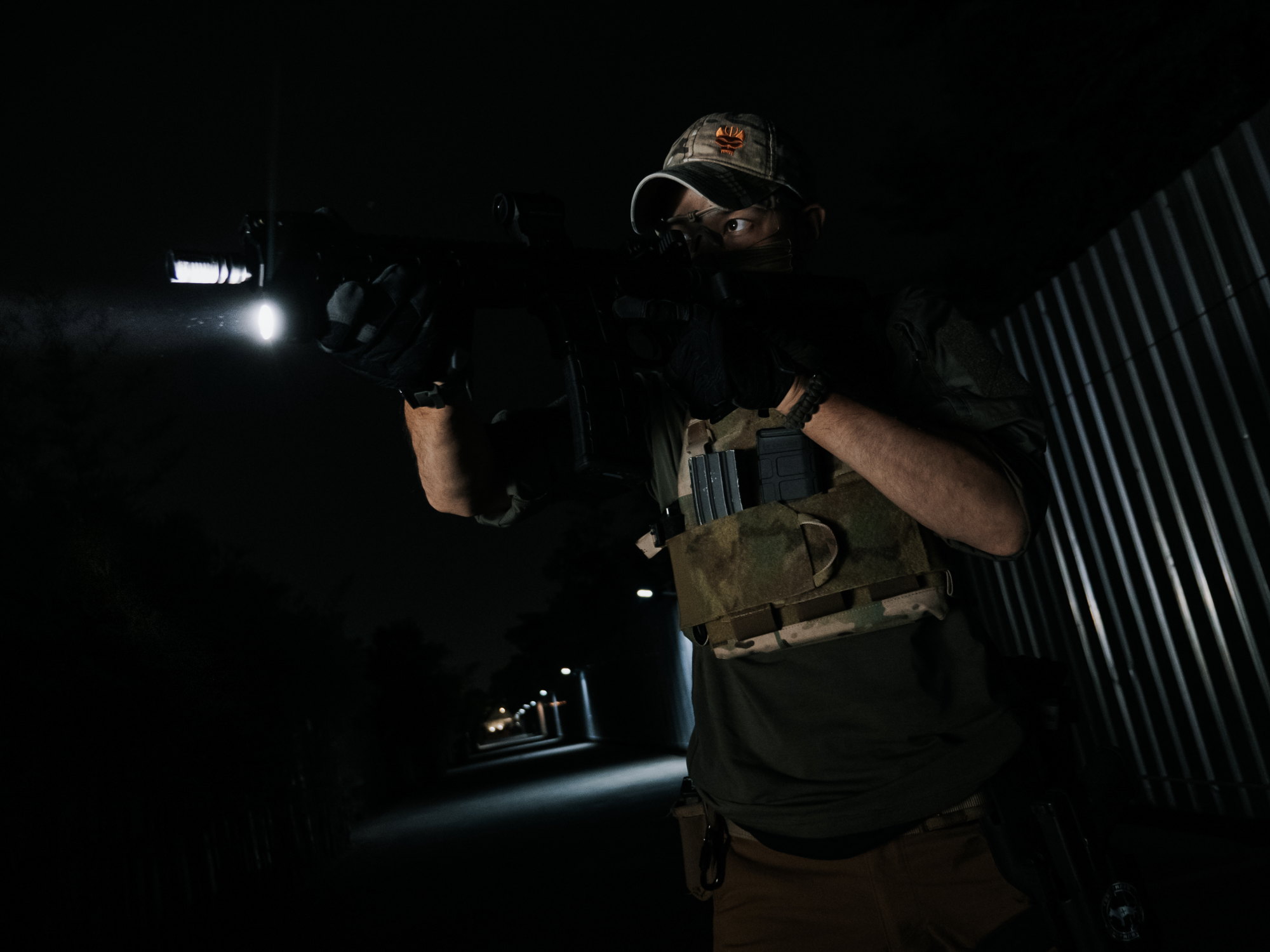 More importantly, the standard aluminum alloy Picatinny mount makes Sigurd quick and easy to install. It will also mount easily onto M-LOK or KeyMod rails using a simple and inexpensive Picatinny rail adapter (not included). The energy-dense lithium polymer battery makes it able to be easily and conveniently charged without removing it from your handguard via the included Olight signature USB magnetic charging cable. 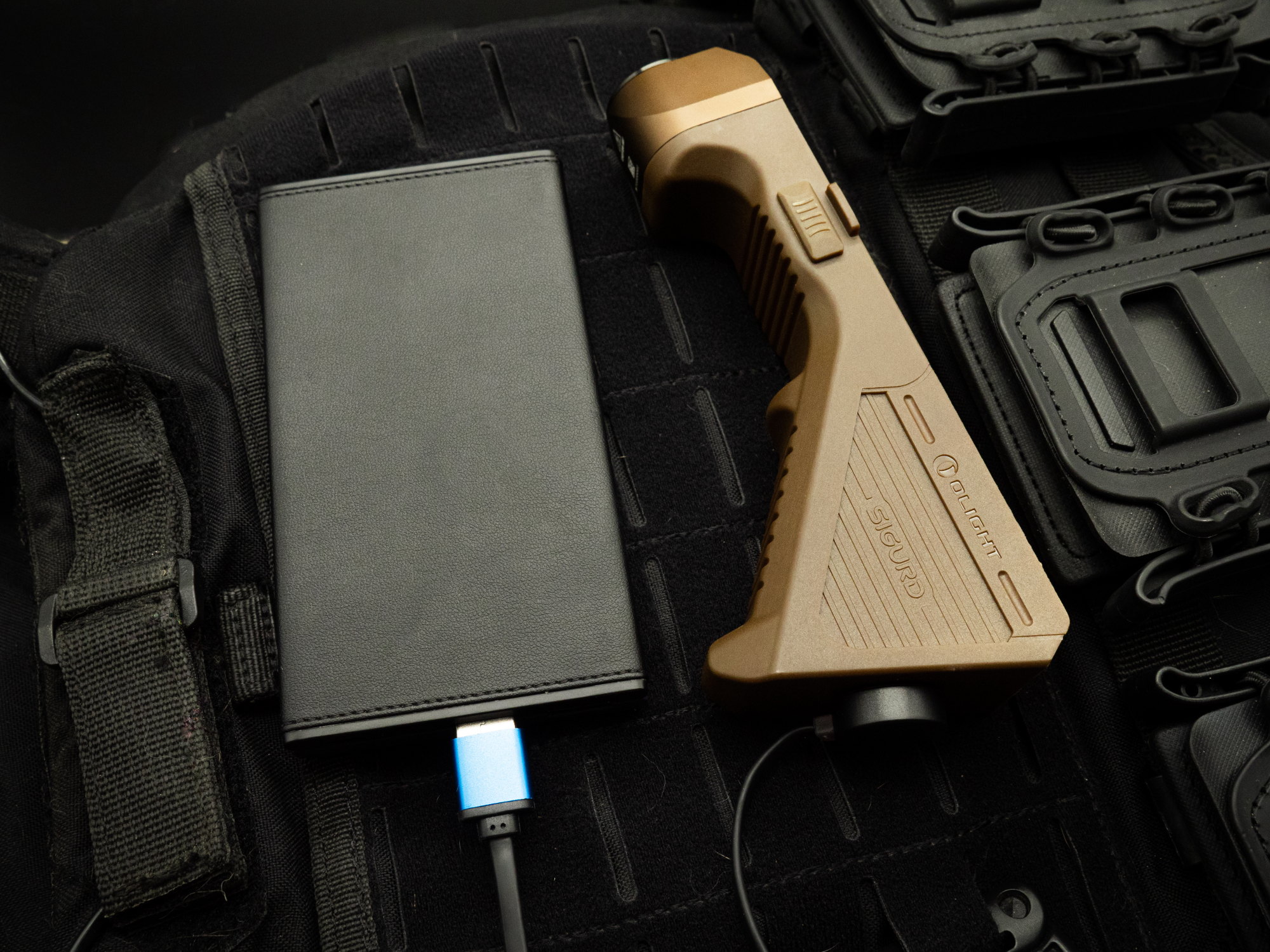 This is an industry-leading, compact WML/blue laser (BL) beam combo, featuring an 800-lumen max white light output (33% more than Baldr Mini) on high as well as a 100-lumen low mode for increased versatility. It leads the way with its precise, Class IIIa 440~460nm BL beam (<5mW), which appears brighter to the eye than an ordinary red laser (RL) beam, but not as glaring as a green laser (GL) beam at close range. Moreover, you can quickly and easily switch between modes to select white light only, BL beam only, or both combined. Additionally, the built-in 3.7V 380mAh lithium polymer battery provides a max runtime of 140 minutes, which is more than enough for extended-range trips. 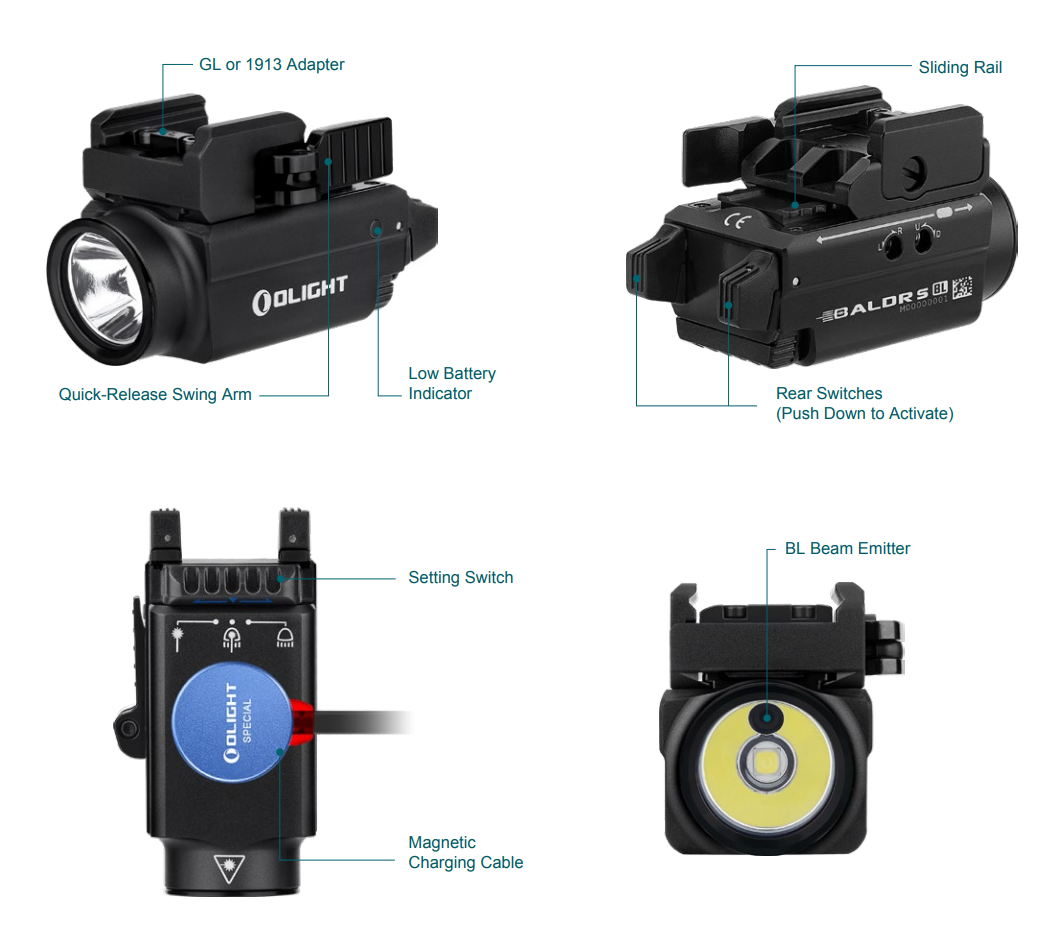 The Baldr S BL includes Olight's patented rail mount to allow you to easily slide the light to your desired position fore and aft, and it includes rail adapters for both Glock and Picatinny rails. 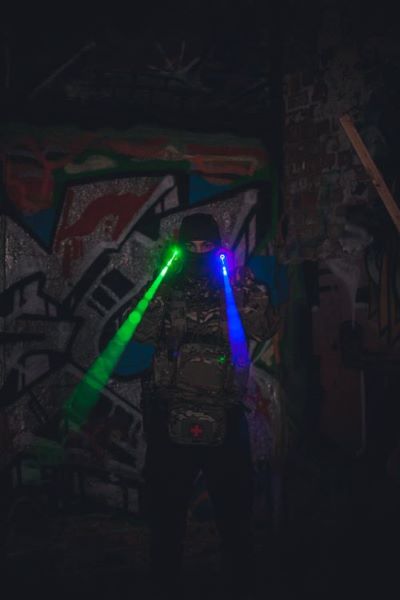 Also, the dual ambidextrous switches make for smooth and easy momentary-on or constant-on activation with either hand. 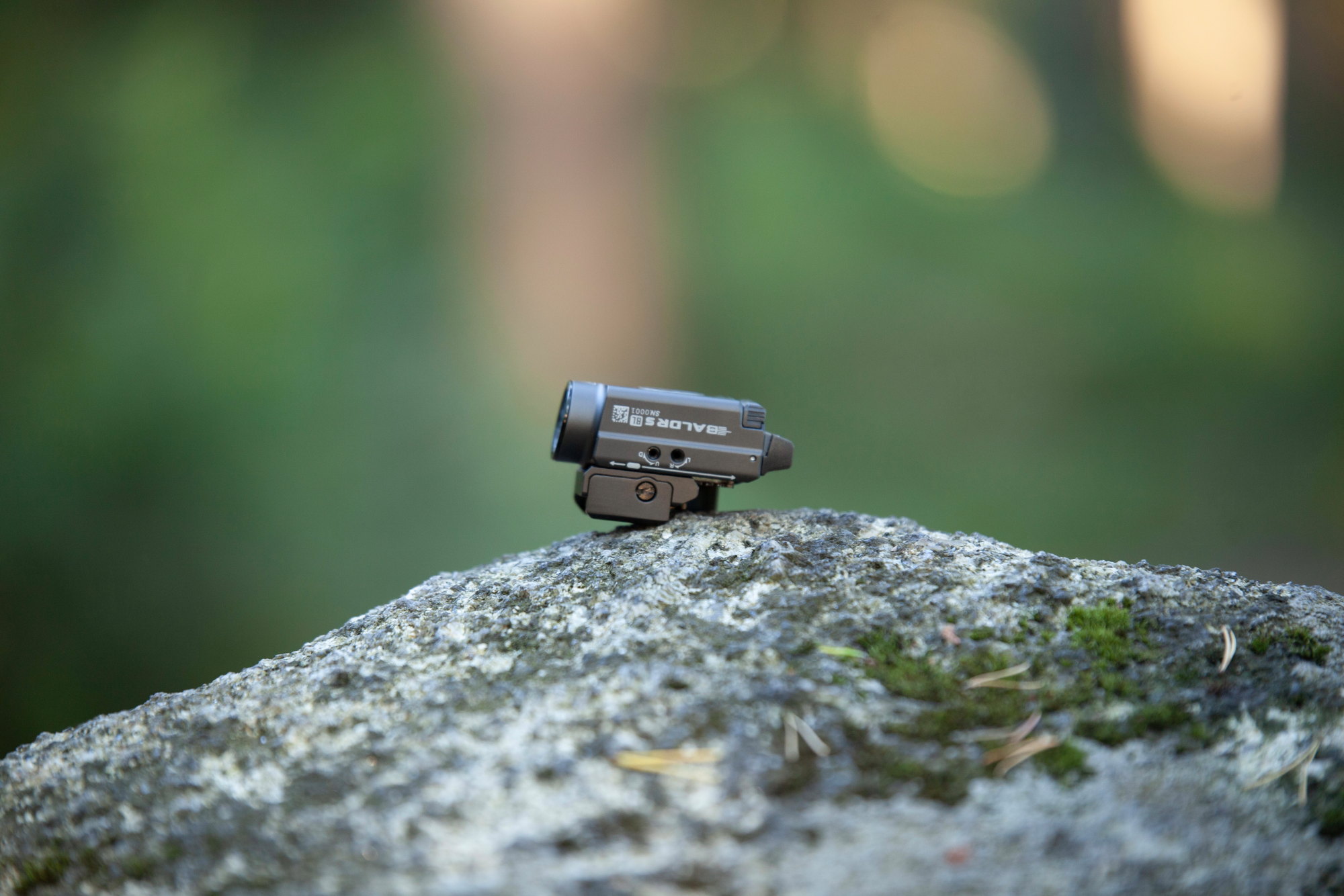 The Baldr Pro R is the flagship product in the Baldr series, boasting a white light with a max output of 1,350 lumens like Baldr Pro, but adding a green laser (GL) beam (<5mW) for quick and accurate aiming as well as Olight's signature magnetic charging. The magnetic charging port on this light also allows the use of a remote pressure switch (RPL-7, available separately), making it the most versatile compact WML we offer. This WML has it all! 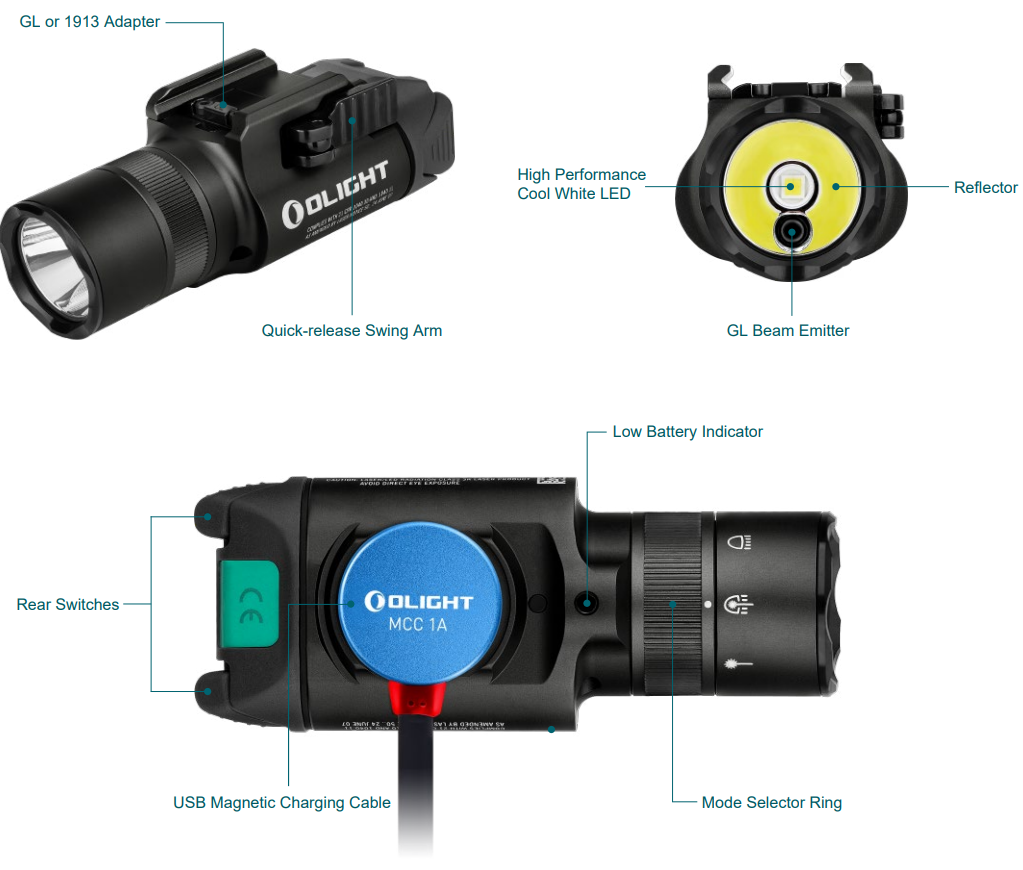 The GL beam emitter is seamlessly integrated into the head of the light. Powered by a 3.6V 1000mAh lithium polymer battery that can be easily recharged via the magnetic charging cable without removing the light from your rail, this WML runs for up to 93 minutes.

Baldr Pro R has a great user interface. The selector ring around the head allows you to quickly switch between white light only, white light & GL beam combo, or GL beam only. The Baldr Pro R includes two rail adapters to fit both Glock and Picatinny rails. With the quick-install system, you can easily attach and detach the light. The well-tested adjustment screws allow for easy zeroing of the GL beam and can withstand strong impacts without loosening. 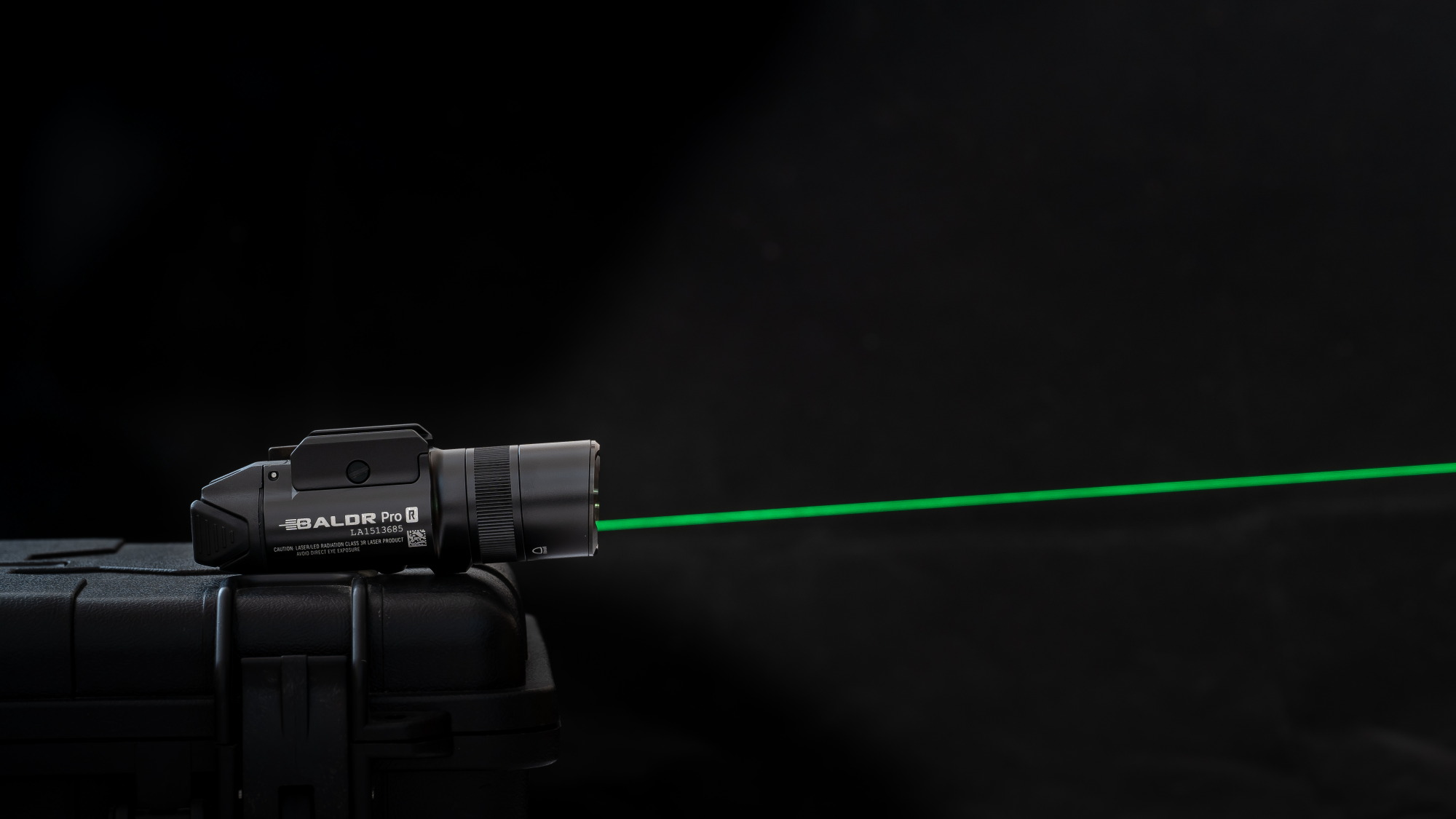 The ambidextrous rear switches allow for quick momentary-on or constant-on activation with either hand and direct access to the strobe. Powerful, precise, and versatile, the Baldr Pro R is an ideal addition to any setup.

After reading the above article, do you have a better understanding of these three tactical lights? What are your thoughts about them? Let us know in the comments below and tell us about your favorite Olight tactical light!

Previous
DID OLIGHT CREATE THE NEXT BEST THING IN EDC? -Ofan Reviews
Next
Do You Know the 3 Best Camp Lights by Olight?

The Baldr Pro R is by far my favorite, love those lumens!

The Sigurd has to be the top of this short list. I like the extremely bright high setting. The button guards are good. It is a little Chonky. If a redesign is on the board, can you try to taper the body in toward the switches and then taper it back out at the lens? Overall, I like it. A white light/ 940NM illuminator version would really be useful. Marauder Mini VS Marauder 2, Which One Do You Like? 6 Picks That Could Become O-Collector Favorites! $ 79.99
Email me when available
Submit successfully